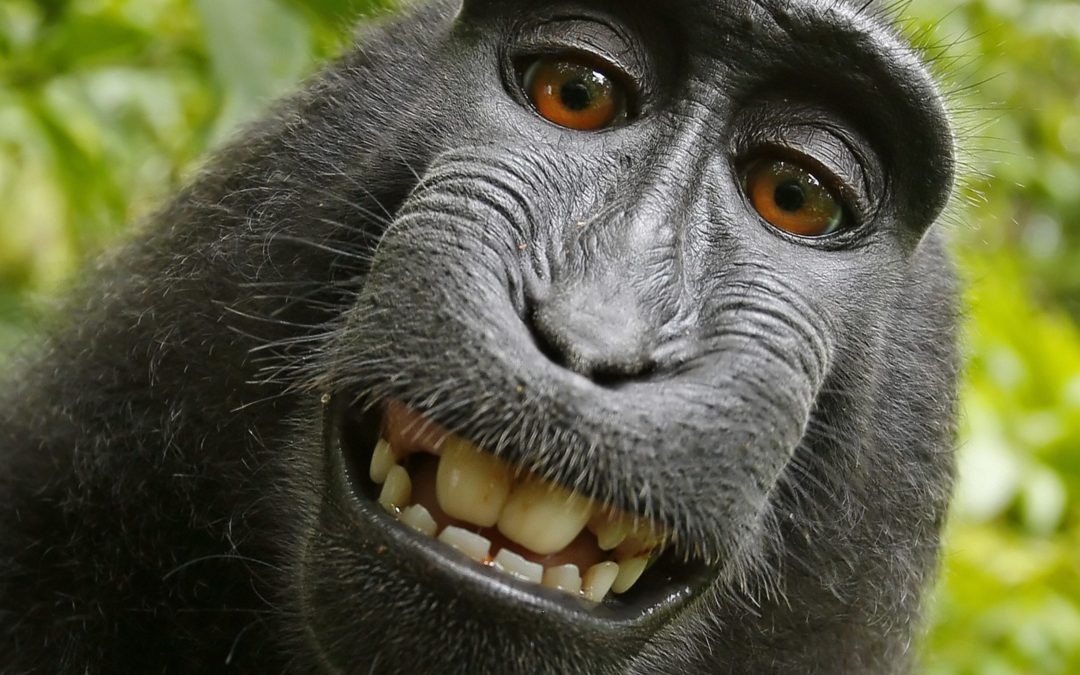 In case you missed it the first time, the “Monkey Selfie” photo is back in the news. A few years ago, a precocious 6-year-old Indonesian crested macaque monkey named Naruto stole a camera from a professional nature photographer, and took several photos, including a smiling self-portrait. Believe it or not, the photos became the subject of a legal dispute regarding who actually owned the rights to the images since the photographer was actually a monkey.

It has made for an interesting legal case, but are we missing a more subtle revelation? Why are people so drawn to this photo?

The monkey selfie demonstrates our brain’s hardwired behavior regarding smiling, and it’s a behavior our primate relatives share with us. The smile expression displays a friendly, non-threatening gesture, a means to advertise positive emotions and a cooperative disposition, and frankly, Naruto nailed it! The monkey was mesmerized by his own reflection in the camera’s lens, presumably thinking that he was gazing into the eyes of another monkey, and he naturally flashed a flirty, friendly smile that did exactly what it was suppose to do: steal our hearts!

In most species, showing one’s teeth is an act of aggression. But as Frank McAndrew, a professor of psychology at Knox College in Galesburg, Ill., notes, “In primates, showing the teeth, especially teeth held together, is almost always a sign of submission. The human smile probably has evolved from that:” http://www.scientificamerican.com/article/it-seems-that-in-almost-a/

As an expert in the science of influence, I study subtle factors that influence people in a big way. The smile is one of those subtle gestures that holds significant power to create good feelings and to predispose people to like you. In fact, even babies will mirror a smile back to you – that’s a hard-wired response in humans. So, remember to smile. It triggers an unconscious positive reaction in other people and has a positive affect on your own brain as well.

So, what happened to the legal case about the rights to the smiling monkey photo? It was recently settled with the professional photographer who owned the camera retaining the rights, but agreeing to give People for the Ethical Treatment of Animals (PETA) a 25% financial interest in the revenues generated by the images. PETA plans to use the funds to protect the habitats of endangered monkeys just like Naruto. That gives everyone involved something to smile about all the way to the bank.